Here you will find an overview of all cookies used. You can give your consent to whole categories or display further information and select certain cookies.

Please activate cookies in your browser settings in order to experience the full scope of this website.

December 2020 | Over the past 20 years the way that water quality sensors communicate has changed significantly. The new spectro::lyser V3 sets out to change the water sensor landscape once again by bringing real Internet of Things (IoT) capabilities to the field. The implementation of the REST API (Representational State Transfer Application Programming Interface) as the main communication protocol enables direct communication of the spectro::lyser V3 with mobile applications and cloud services.

What is REST API?

A lot of manufacturers, nowadays, promote their sensors using the Internet of Things (IoT) terminology. However, what is understood under IoT, is very different from one to the other sensor supplier. Some call the implementation of any type of digital interface on their sensors a leap forward. For us this actually is the past as s::can sets the future pace for implementing sensors directly into any network, local or directly the internet, by integrating the de-facto standard communication interface of modern web applications into the spectro::lyser V3: Representational State Transfer (REST) Application Programming Interface (API).

Invented around the year 2000, REST API was broadly adopted the first time when major online market places started to offer this type of communication interface between their servers and third-party developers. Today any major cloud platform such AWS or MS Azure platform has adopted REST API. If for example data is transferred between AWS and any type of external device or even between two software applications running within AWS, data is very likely exchanged using REST API.

The implementation of the Representational State Transfer (REST) Application Programming Interface (API) therefore enables direct and easy communication of a spectro::lyser V3 with mobile applications and cloud services leading the way into the future of online water quality sensors.

Recent discussions showed that this trend is picked up by big automation companies who see REST API as a possible component in their innovation strategy and most likely as one very important communication interface for their edge computing devices.

Using the REST API of the spectro::lyser V3 makes it as simple as it can get to implement your measurement data including spectral information into any modern cloud service of your choice. Once collected these data can be used to apply advanced AI strategies targeted to the need of end customers such as alarm systems based on distributed sensors in a drinking water network. In any case customers have full control over their data and how it is used.

How does REST API work with the s::can spectro::lyser V3?

The way REST API works can be imagined as a user looking up a website on his or her favorite browser. Entering the URL in the address field sends a request to the corresponding webserver which then delivers the website. In the case of the spectro::lyser V3 an app / terminal or cloud solution sends its request to the webserver running on the V3 over the REST API and uses the exact same mechanism (HTTP) if you would open a website. The reply of the V3, however, is not a nice formatted website but measurement data and status information formatted in a machine-readable way (JSON string). 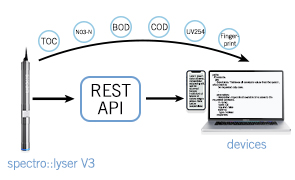 What do our users say about using REST API to interconnect the spectro::lyser V3 with an external logger?

“The Python API code to interact with s::can works very well and meets our planned needs for the s::can deployment planned at Roger Williams Park, Providence Rhode Island. The SPV3 driver is very robust and does everything we need to allow us to capture, organize and visualize data.” – James Houle, University of New Hampshire

Implementing REST API additionally to Modbus as s::can’s main future communication protocol underpins our leading position as key innovator in online water quality monitoring, simplifies the life of our customers and lets them be two steps ahead of their competition.